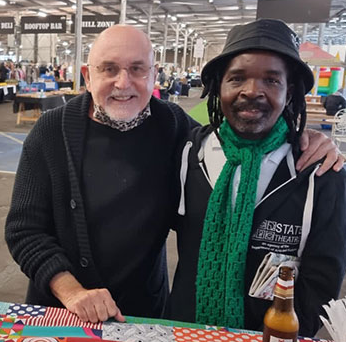 Some time in March, I was invited to a concert with a difference held at a venue called Causeseries in memory of David de Pinna, the late father of well known entertainer Michael de Pinna. His father was an equally well known London stage actor.

De Pinna plies his trade on TV and film as an actor as well as a musician.

Those who went to the concerts held in an intimate setting of the musician’s home in Atholl, Sandton, all sang praises of the concert. I missed the most recent concert because I had another commitment and necessitated a change of plans.

Another opportunity came along as it were on April 3, 2022, but again I could not make it as this time around I was coming back from the KKHK Festival in the Karoo town of. Although the concert was in the evening, my plane landed late on that afternoon at OR Tambo International Airport, flying from George Airport in the Western Cape. Again I missed the concert because was exhausted by the three days of cultural immersion at the festival in the Karoo.

Again those that attended the Michael’s soiree concert sung praises of it, like a broken record, suggesting that they indeed had so much fun there.

Now I am waiting for being third time luck, that is If I crack another invitation to the next soiree, and it may be pretty soon.