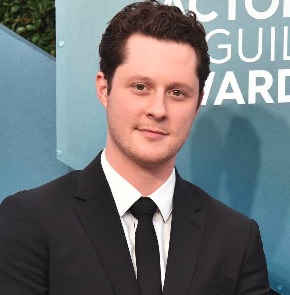 Schitt’s Creek star Noah Reid has slammed the “anti-human” rise in anti-LGBT+ legislation across the Americas.

Reid, who played Patrick Brewer on the beloved comedy series, condemned the legislative attacks in the US attempting to marginalise the LGBT+ community in the US in an interview with the Daily Beast.

“I think it is anti-human, and I think it’s very sad that in this country where people are obsessed with freedom there seems to be a cognitive disconnect around who gets to experience freedom,” Reid said.

“But I have hope and faith that the people will be the deciding factor in these matters, and that we will overcome these draconian, ridiculous pursuits of hate and intolerance.”

The straight actor also spoke about how he believed it would be a “mistake” to “play gay” during his time on Schitt’s Creek. He thought it would be better for him to play a “man who falls in love with another man” to “build that connection into the character”.

“I can fall in love with another person, for sure. I think all of us can,” Noah Reid said. “One of the things I loved about Patrick was the personal understanding and comfort within his own skin to follow his desire and connection.”

He added that his co-star Dan Levy, who plays his on-screen love interest and eventual husband, made it “very easy” for him as they have a “natural chemistry”. Reid described how it was “incredible” to have a “front-row seat to the sculpting of that relationship” and to be able to see the way that it impacted fans.

“It was handled with a lot of care and a lot of love,” Reid said. “It wasn’t an accident that that relationship meant so much to so many. It was crafted that way.”

He thought that playing Patrick reinforced his belief that it “doesn’t matter who you love” as “you’ve got to follow your heart”.

The fan-favourite on screen hubbies had a mini-Schitt’s Creek reunion after Dan Levy showed up to the opening night of the play The Minutes to support Noah Reid, who was officially making his Broadway debut.

The official The Minutes Broadway Twitter posted a video on Monday (18 April) of the pair hugging and smiling for the cameras.

Levy gushed on the social media platform that Reid “crushed it” during his debut, “obviously”.

While it wasn’t an official Schitt’s Creek reunion project, it was nice to see the two together again, and hopefully, it’s a sign that the show’s cast will have more get-togethers in the future.