The Offensiveness of the Offended 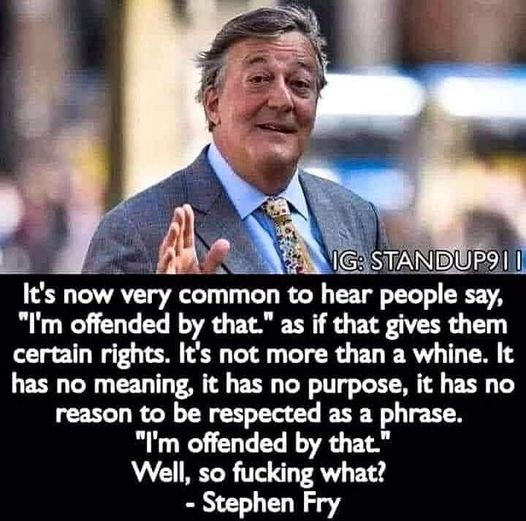 Actor, author and social commentator Stephen Fry has perhaps summed up the crux of what I want to say in a meme.

Actor, author and social commentator Stephen Fry has perhaps summed up the crux of what I want to say in a meme, which reads:

I am writing this in the wake of a millionaire slapping another millionaire in front of many more millionaires and a world-wide audience. Yes! the Chris Rock/Will Smith Oscars fiasco. Social media and the twitterati went wild, as per usual, with people suddenly becoming experts as if they were there, knew the back-story and were themselves actually affected by the slap. My immediate feeling is to quote Stephan Fry “so fucking what”, what I want to know is where is the outrage and worldwide concern around children starving or abused animals or a planet that is dying. Why is it that because a celebrity slaps another celebrity does the world go mad and twist themselves into knots over who is more PC or who is more offended than the next person. Surely, we have so many social problems we need to address as a worldwide society that we should be able to put this incident into perspective. As a caveat I don’t condone violence in any shape, manner or form, ever, but what I am asking is why can’t we look beyond the celebrity and address the real problems facing us.

Now I know that we live in an online world and many people have “celebrity” status and we are seduced by the glamour of the “reality” world portrayed by these celebrities, but I do feel that I personally would like to go back almost to a time where we cared more about the right things, where an individual feeling offended does not trump the real issues at stake.

I started thinking along these lines recently when on a Gay WhatsApp discussion group, I belong to started discussing and yes being offended by the latest census taking place at the moment. The complaint which was taken up by many people on the group revolved around the fact that the LGBTQ+ community is not reflected on the census form. A local gay MP asked the question of the relevant authorities and the answer was, the census is only looking at gender as opposed to sexuality. I cannot remember if there was a place on the census form to define your gender as other than male and female (and if it was not reflected then I agree that this should be rectified). What transpired though was people on the group rallying others to boycott the census. Whilst everyone has the right to their opinions, what I am asking is do we as a community need “special’ mention for our sexuality when no other groups sexuality is recorded. I think not personally, but again, surely there are more pressing issues to put our energies into rather than perceived slights, especially when there is a logical answer to the concerns.

For a long time, I have been thinking about creating a movement SAVE ME FROM WOKE, which ties into my thoughts here. So many people seem to fall into the trap that once they have embraced an issue or cause that their issue is the most important one and if you don’t subscribe or heaven forbid fully embrace their vision, then you are perceived to be less than, uncaring, a blot on society. Suddenly you become the issue, your perceived lack of caring is a stain on your character and as such a less than mortal. In saving me from the woke, I identify with Stephan Fry’s assertion stated above, you being offended really does not have any real merit in the grand scheme of things. Now I am not saying that we shouldn’t take people’s feelings into account, and we should obviously be aware of the issues facing us and them, but those feelings really have no currency actually.

So, let us strap on some armour to protect our feelings and go forth into the world with the absolute certainty that not everything will go our way, not everyone will see things the same way we do. Let us perhaps think of why the other person has reacted the way they have done, what circumstances have created their worldview and perhaps instead of offense lets perhaps try a little understanding.