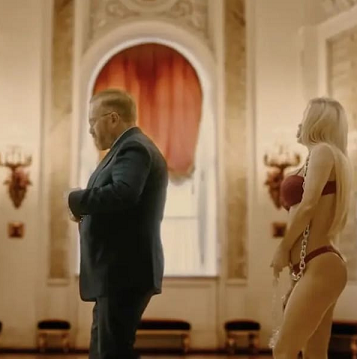 Russian politician Vitaly Milonov is co-hosting new reality competition I’m Not Gay where contestants have to guess who among them is gay. Yes, seriously.

State member Duma Milonov is one of the most vocally homophobic politicians in Russia.

He was the architect of the country’s hateful “gay propaganda law“, which criminalises “promoting non-traditional sexual relationships” to minors, has called for gays to be “sterilised” and kept in shelters like cats, and when asked in a 2019 episode of Reggie Yates’ Extreme whether he thought gay people were dangerous, he said: “A piece of s**t is not dangerous, but it’s quite unpleasant to see on the streets.”

The new show I’m Not Gay is the brainchild of blogger Amiran Sardarov, who released the first episode to his YouTube channel on Monday (25 April).

It sees seven straight men and one secretly gay man move into a country house together. The contestants must perform various tasks and challenges to “prove” their heterosexuality and at the end of each episode they eliminate one person suspected of being gay.

In the final, if the remaining straight men have eliminated the gay person, they share a prize of two million rubles (£21,000) and a figurine of Vitaly Milonov. If the gay man remains, he takes the prize for himself.

According to Russian site Fontanka, challenges in the show include a speedo fashion show, receiving strip teases from both men and women, and contestants putting their hands into a glory hole fashioned out a giant photo of Milonov’s mouth, before guessing if they are touching the bum of a man or a woman on the other side.

In the first episode, the State Duma member told the I’m Not Gay contestants: “I hope that you will quickly figure out the gay.”

When the episode concluded without the gay man being found out, he ominously said: “You killed an innocent person.”