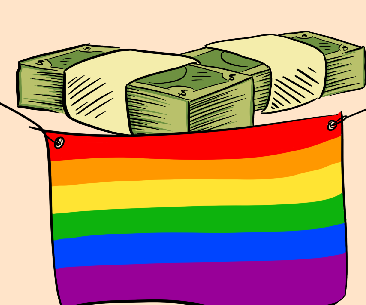 Throughout the month of June, members of the LGBTQ+ community gather to celebrate Pride month, a commemoration of the Stonewall uprising in 1969 and the subsequent overcoming of barriers surrounding sexuality.

Pride month has really come into the public eye in the past 50 years, as evidenced by the rise in Pride marches all around the country. Although gay pride has been celebrated for decades, the decision by the United States Supreme Court to legalize gay marriage nationally did not occur until June 26, 2015. Since then, Pride month has become much more than just a celebration — it’s now a capitalist society’s dream. From Target’s “Ew, David” “Schitt’s Creek” T-shirt to Disney’s “Belong, Believe, Be Proud” pins, multi-billion dollar companies continue to profit off of Pride month.

The term “rainbow-washing” has been popularized over the past few years. It means that companies will outwardly “support” the LGBTQ+ community by selling rainbow-themed merchandise during Pride month without actually doing anything meaningful to support the community. Other than Target, which financially supports the Gay, Lesbian & Straight Education Network (GLSEN), — an education organization that aims to end discrimination based on identity — it is hard to find big corporations that have taken real action to support the LBGTQ+ community. In fact, many companies have done the complete opposite.

Among the most problematic companies when it comes to recognizing social causes is Walmart. According to an article by Business Insider, Walmart was one of the biggest donors to lawmakers against the 2020 Equality Act, donating $1.2 million to lawmakers opposed to the bill. Though they did split the money evenly between Democrats and Republicans, even then, Walmart knew that they were donating to politicians in the House of Representatives who were opposed to the bill. It is also noted in an MSNBC article that they donated $43,000 to Arkansas lawmakers who helped pass anti-LGBTQ legislation. Walmart now has a full Pride collection, which may lead some to believe that they are changing their ways. I am not convinced.