The Sandman Season One Review: Bring me a dream 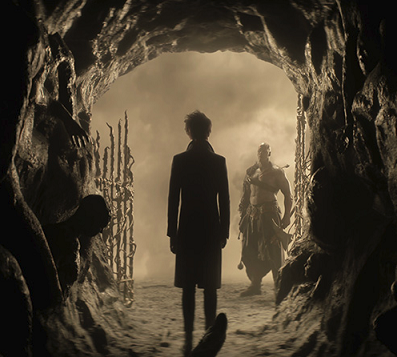 Neil Gaiman’s The Sandman has been brought to life with a new TV series adaptation for Netflix. Here’s the SciFiNow review…

Neil Gaiman’s classic Sandman comic book series is one of those properties that has long been considered ‘unfilmable’, mostly because it’s told largely in vignettes, over thousands of years, with a supporting cast of hundreds. Various people have wanted to adapt it over the years, and Gaiman said no to them all – until Netflix came along with their offer. And, thankfully, Gaiman’s instinct to wait for the right partner has resulted in a grown-up, intelligent fantasy series that fills a gap in a market overflowing with snarky, whizz-bang fare.

The series follows the first two volumes of the comic quite faithfully, as Dream, the none-more-goth immortal lord of the dreaming realm (Tom Sturridge) gets captured by a human magus (Charles Dance, in classic bastard mode) and deals with the consequences of his powerful totems being stolen. His quest to regain them takes in a journey to hell, a visit to London with Johanna Constantine (Jenna Coleman) and a horrifying trip to a 24-hour diner with David Thewlis’ John Dee. The second half of the series focuses on Dream’s problems with Rose Walker (Vanesu Samunyai), a young woman with a dangerous connection to the Dreaming. Through it all is the little issue of escaped nightmare The Corinthian (Boyd Holbrook), causing all manner of problems for Dream.

The temptation to foreground Dream’s wacky Endless siblings must have been strong, but the show has instead retained the comic’s interest in the regular folk caught in the middle, such as Hob Gadling, who finds himself immortal thanks to a bet between Dream and his big sister Death (Kirby Howell-Baptiste). Dream’s siblings feature only as glorified cameos, with Kirby Howell-Baptiste shining in a tear-jerking episode, and Mason Alexander Park on wickedly grinning form as Desire.

The show is taking its time, confident that it will be able to tell its full story at its own pace, and reveal its characters and their motivations at the right time. The characters that we meet here are all executed admirably by a stellar cast. Jenna Coleman’s gender-swapped Johanna Constantine is, oddly, one of the most comics-accurate portrayals of the character, and Gwendoline Christie’s beatific Lucifer is like a sinister Renaissance painting come to life. Thewlis and Holbrook also turn in very different, but equally powerful, villainous performances.

But season one, really, serves as a character study of Dream. He begins near-silent in episode one, an unearthly pale and sinewy creature, before the show reveals that the proud, often mopey, sometimes wryly funny Dream has more in common with humanity than he would like to think. And, indeed, if comic fans have one niggling problem with the show it will probably be the fact that Sturridge’s Dream looks less like a god and more like someone you’d see smoking outside a pub in Camden. But TV is a different medium to comics, and this version of Dream works on the screen – and makes the moments where he adopts the laws-of-physics-be-damned aspects of his being all the more impressive.