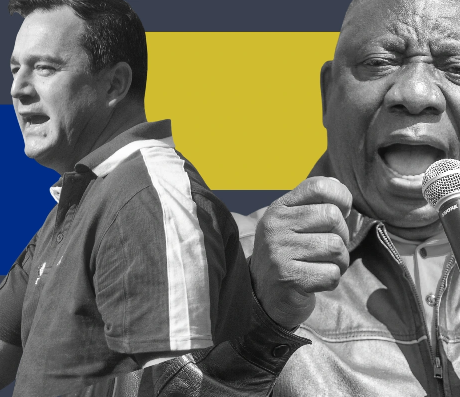 According to a new Ipsos poll, the ANC is collapsing as a majority party and South Africans are despondent, mainly because of the accelerating cost of living.

Despite being down from post-Nasrec highs, President Cyril Ramaphosa is still South Africa’s most highly regarded political leader.

A new representative poll by Ipsos suggests that if an election were held tomorrow, the ANC would get 42%, the DA 11%, the EFF 9% and Herman Mashaba’s ActionSA 3% of the votes at a national level. A second poll, published by Rapport at the weekend, has the ANC at 38%, the DA at 27% and the EFF at 10%.

Either way, it’s bad news for the governing party. At the weekend, ANC deputy president David Mabuza warned party delegates to a provincial conference that it was bleeding support because of the party’s state.

“When you speak to people, they say: which ANC? They feel there’s not strong enough leadership from President Cyril Ramaphosa. There’s lots of uncertainty about December [when the ANC holds its executive electoral conference] and he talks about people who will be responsible for what they did, but people are not stepping aside. There’s a lot of talk but not a lot of action,” says Ipsos director Mari Harris.

The poll is a snapshot of eligible voters, not registered voters, and the DA usually does better than it is polled because it gets its members to register and to go out and vote.

However, the ANC’s downward spiral is not any other party’s gain.

“Support for the ANC in the whole country is lower than before the local government election [in November 2021]. This suggests that new councils have not made a difference. I would be surprised if the ANC gets more than 50% in the 2024 national election.”

Harris says the party achieved 47% of the vote in the local government elections and appears to have subsequently lost five percentage points in support.

“The slide is going in the wrong direction.”

While the DA’s own polling suggests more green shoots, the Ipsos poll shows stasis for the party. Harris says its complaining tone counts against it.

“I don’t think complaining about everything government does is a good strategy. You need to prove you are a credible alternative without complaining. All political parties need to be a positive force.”

The EFF support appears to have plateaued at 9%, according to the latest poll, but Harris says both the DA and EFF are likely to do better than the poll suggests, come 2024. ActionSA, led by Herman Mashaba, remains a Johannesburg phenomenon, but it is building party structures across the country. This is not without start-up headaches, as it fired its KZN provincial executive this month. What is evident in both polls is that ActionSA has quickly caught up with the IFP. In the second poll, the two parties are running neck and neck.

PrevPreviousThe Sandman Season One Review: Bring me a dream
NextAnother Amazon acquisition brings us closer to the death of privacyNext